Today I went to pick Sonjena up forever. Yes!!! Today is her Gotcha day!!! :) :) :) I brought her one of Emily's old Christmas dresses, because I thought she would think it was a princess dress. It was a good thing that I brought it, because they expected her to wear a dress to the American Embassy. They told me to wear a dress too, but I don't own one anymore, and didn't have the money to run out and buy one. Anyway, I looked as good as I could for the occasion. :) So, I set off for the orphanage at about 8:30 a.m. here. India is a very big place, and very very busy. There are many many cars, many motorcycles, and many people everywhere. So, it took a half an hour to get to the Children's home. (The kids there are sooooo adorable, but I can't post pictures of them.) I was so happy to see Sonjena. She looked adorable in her dress. She looked so proud and happy. 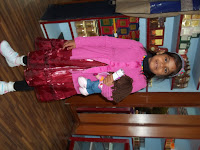 This is her in the dress. She had to wear a sweater, because it is 75 degrees here, and all of the Indian people are freezing. :) That was the only sweater I brought. It doesn't match, but she still looks cute. :)

Then Madhu was supposed to come to the Children's Home, and meet me, and take me to the Embassy. I went downstairs to the street, and she was not there. I went back up, and had the head "Dee Dee" call. (Dee Dee is their word for big sister, at least that is what it sounds like to me.) Madhu said, "I'm downstairs waiting. I went down, she was not there. I wasn't going to wait on the street with my daughter, or by myself for that matter. I went back up, and asked them to call again. They start talking about me in Hindi.

(The night before Madhu had called me. I had to pay her, of course, and pay for the driver, of course. But she said she couldn't come, and get me, because it was out of the way. I told her I did not have Sonjena, and we had to go get her in the morning. She was a little stern about that. Many of the women here seem a little stern, or bossy, maybe pushy to me. I could say many of them are abrupt, and straight forward. I told her the Children's Home director told me to bring her back for the night, so I did. Then she said sternly, "I do not know this place, how will I find this place?"
I said, "I don't know my way around India." She said to me again, "Jennyfer, I do nowt know dis place?" :) I'm trying to write the Indian accent, it is so cute. And I love the little side to side head shake for agreement, or listening.
I had a brilliant idea to get the address off of one of my documents, so I did. She still did not know where it was. I told her to call V.J. the director, and she would tell her (well, she did not). She told me to meet her there with yet another driver that I paid for, because she could not pick me up, it was too far out of the way, so I did.)

The head Dee Dee gets back on the phone. They are talking very loudly, and emphatically in Hindi. Then she gets off the phone, and tells the second in charge about it. They are both laughing. They have 3 different Children's Homes, the address on my documents was a different one. They all think I am ridiculous. They are laughing, and laughing. I laughed too.

Then Madhu and the driver finally get there a half an hour later. The driver comes up, and is talking to all the Dee Dees, and everyone is laughing. I looked at him, and said, "are you making fun of me?" The driver said, "Yes," and we all laughed again.

So, we were late to the Embassy. There were maybe 200+ Indian people waiting in line for Visas. (Madhu said it was a very slow day.) We go right to the front of the line. It's different for me, because I am an American. Also, adoption cases are different.

As we are sitting there waiting, I can hear an American Embassy worker being stern with an Indian person. He said, "you have given me two different names, and two different passports sir. Now, I know that you are probably desperate to get into the United States, but you can either take these, and turn around, or I can enter them, and you can be charged with misrepresenting yourself." The Indian man continued to fight, and tell him why he had two names. He was there with a wife, and a baby. The American man did not let down either. It went on for quite sometime, and finally the Indian man left without a Visa.

Then a woman who had been in America for a long time wanted to get back in. Her husband had died, and her only family, her daughter, was in America. The woman talking to her was stern as well. She said, "if you have been back in India for four years, it will be very difficult. You have to start the process over."
The woman said, "but that will take so long. I am here all by myself." I didn't hear how that one ended.

Then an American girl came in. She had sort of a hippie style about her. She was maybe in her early twenties. She was telling them that she had to get out of here. That she had to get back home, because of the circumstances (which I did not hear). Then they told her what she had to do and sent her away. She was missing some paperwork. And there were more stories like these. All of them are sad.

Oh, and I brought color books, and a magnadoodle for Sonjena. She had to go potty, and we went in the bathroom of the American Embassy, right, and it is a squatty potty, yes, a hole in the ground, basically. Yikes. I looked at a lady in there, and I was like, "does she," and before I could get the words out, Sonjena was doing it "squatty potty" style. LOL. Too funny.

We came back, and called our new friends from Chicago, Tamara, and baby Taila. We got a driver from our hotel, and we all went shopping. Our driver was amazing. He drove us around showing us monuments, and telling us about them. He took us to a few shops, and we kept telling him they were too expensive. Things are very expensive here because they are real silk, or silver, or ivory. He took us down this back alley. I looked at Tamara, and she looked at me. People were crammed in this alley everywhere. There were stray dogs everywhere. There were people with things piled up 12 feet on bicycles. There were monkeys running between the dogs taunting them. Yes, monkeys. It was a scary alley. I would have never went there without Rajeev. So, I said to him, "you are going in with us, right?" Rajeev said, yes. As soon as we got out, he shoed away the beggers.

Then we went in, and we found a beautiful little shop. It was definitely a diamond in the rough. It had everything we were looking for, and more, at prices we could afford. I even haggled a little. I got both my girls traditional Indian outfits. I got both of them little purses, and little carved elephants. Sonjena wanted a mini statue of the God of mischief. Yeap. Then I saw why tonight, there is a very strange cartoon about him that is popular here.

On the way back to the hotel, poor little Sonjena fell asleep. Then we got back, and ate in the hotel dining room. The bathroom attendant gave Sonjena an unnecessary lesson on Western toilets, because her orphanage had them. Oh, well.

Then back to the room for a shower, and some lice treatments. I gave her a shower, and washed her hair. I then did the lice treatment. I had to leave it in for ten minutes. I wrapped her in tons of towels, but she was shivering, poor little thing. Then I rinsed, and used the lice comb. Oh yes, those nasty little buggers were in there. UGH. So gross. I had never dealt with that before, and I thought I was going to freak out, but I didn't. Yes, I'm such a good mom. I will redo it tomorrow. My sister said if we bring back lice she will kill me. So, I better make sure it's gone. I put footy pajamas on her, and she was warm at last, but she was laughing, and kept pointing to the feet. I think she thinks they are for babies. :) But she is warm, and asleep. I put her on the couch, and told her to go to sleep, and she did. :) She's a good girl. She doesn't know any English. But I am teaching her, and she is learning fast. She's very smart, but she has never been to school, even though they were telling me she had been.

The class system is alive and well here. There are servants everywhere. The head Dee Dee at the orphanage said to me, "you do not have servants in the United States? You do everything yourself? It must be very hard?"
And she will not lift a finger. She tells the servants to bring me tea, and to take it away. She tells them what to clean, and do, and they do it.

Also, I'm getting very used to the people at this hotel treating us like we are some sort of royalty. Always calling me ma'am, and holding the door open, and doing everything the second that I ask, as fast as they can. It's crazy.

Today I saw a man crawling across the street on his nubs. No arms, or legs, just nubs, and in rags. It was very sad. I saw a woman calapsed on the road. That was also hard to see. And again today, there were many many children begging on the streets.

Let's see, what else. I talked to a man on the plane ride over from Amsterdam to India. He said to me, "you know why the plane is so full of Indians?" I said, "no," but I was thinking, because we are on our way to India perhaps. :) He said, "because it is wedding season in India. These are families coming from all over to go to family weddings." There were tons of families, and tons of kids on the plane. It was really cool.

In the Amsterdam airport, I talked to a woman at a shop. She told me that most of the people in Europe can speak 3 or 4 languages. I did not know that. But I think it is very cool. And, so can the people in India. Well, the educated ones anyway. 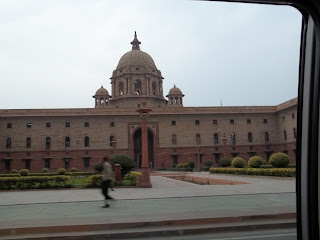 A really beautiful government building.
That's all for today. Night night from India. :) 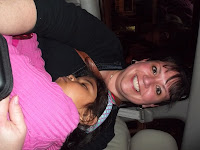 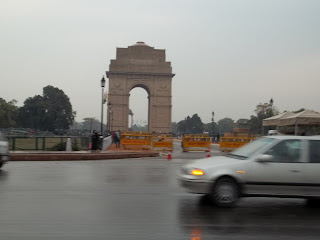 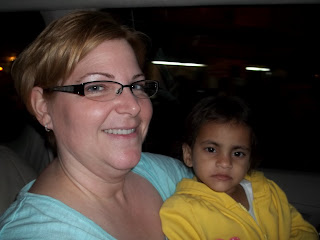