I probably already wrote this but India is a day ahead of us. So, when you go there you lose a day, but when you come back, you gain a day. It's like back to the future or something. It's very strange.

I'm so glad to be home. I hope I stay this thankful forever. I should. There is no doubt about that. 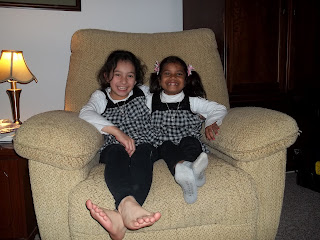 Let's see. On my way to airport the early morning of Thursday Indian time, I was excited to be going home with my new little girl in tow.

When we arrived at the airport, Surrender got our bags out, and he told me that he is very happy for us. We said our good byes. He is a very good driver, and a good man.

At the door into the airport there are military guards. The one at the door I went through was huge, maybe 6'4''. He had on a turban, and a muted green uniform. He began to yell at me in Hindi immediately. About the only word in English was "Papers! Papers!" I got out our papers, and our electronic ticket. He continued to yell at me, and the riffle over his shoulder was swaying back and forth as he shouted, and flapped his arms. He said, "no! No! No!" "Name?" and he pointed at the electronic ticket. I pointed to my name, and to Sonjena's. He kept yelling, and shuffling through my electronic tickets. I just wanted in the doors so badly. He kept shaking his head no, and looking at me like I was committing some crime. I pointed to our names again, one at a time, and then to our names in our passports one at a time. He continued to shake his head. I lined the passports up with the e-ticket. After about 10 minutes of convincing him, he let us in. It felt like an hour.

Then we were in line at the ticket counter with all our bags, and an Indian lady siddles up along side me. I was so done with all of it at that point, I just kept thinking, keep siddling lady, you're not cutting in front of me TODAY, maybe some other day, but not today. Indian women maybe pushy, but so are American women, so look out. :)
Just kidding. The line attendant told her to get in line, but she wouldn't, she was practically right on top of me. Finally, the line attendant took her to another line. Thank goodness. A lot of people in India do not have a sense of personal space. It's obvious why, because of the over population, and how very crowded it is. Personal space is definitely something Sonjena has to learn about. (For example, on the plane once, and awhile she would hang over the arm of her chair into the next person. Or when we were getting off of planes, she was always practically under the feet of the person in front of us. Easy to see why, since she is coming from an orphanage.)

I got to the counter, they checked my documents. Then they wanted my adoption documents, so I took them out. The guy started photographing the adoption documents. I asked him why, and he said he had to have copies of adoption documents, and that is how he did it, with a camera. We checked our bag, and got our tickets. The ticket counter forgot to give me the slip you have to fill out to get through the visa officers. So, I waited in line to show them our paper work. We waited, and waited, and waited, and when we got to the front of the line, they told me I didn't have that paper. I went back to the ticket counter, waited in line, and got the paper. Then I filled it out, and I got back in line. We got up there, and apparently my last name was spelled wrong on Sanjana's passport. I was so afraid he wouldn't let me through, and I would be stuck in India, until it was fixed, but he let me through. Shhhoeww. But I thought, I'll never get through in Amsterdam, but I did, and the U.S.

Then we got to security, and I had to show the first guy our paperwork, then another guy. Then another crabby guy wanted my paperwork, and was yelling at me again. My stuff went through the scanners, and something was wrong. I was like, "what? What? What's going on?" So, they told me to open my bag, and go through it. I was so tired that I had forgotten you can't bring liquids on an airplane. I wasn't going to take my toiletries, because I didn't want my bags to be heavy again. At the last minute, I decided to take them, to save money on buying new ones back home, and because I was so tired, I forgot about the rule, and put them in my carry on. I had shampoo, mouse, hair spray, and contact solution in there. They pointed with their guns, and I said, "I know, I forgot about the rule, I am sorry, they are hair products. I don't care about them, take them." They made me wait, about 10 minutes, and then they told me they were keeping them, I said, "fine. I don't care about them, I just forgot the rule." There were Asian businessmen in line behind me, and they were laughing. I had showed our papers a total of 6 times by then.

Before we got on the plane, I had to show them 6 more times. Yes, that's 12 times, before we could leave the airport. The guy with the machine gun just before boarding the plane, like at the end of the boarding ramp, I was thinking, "holy sh**, are they ever going to stop checking my papers, holy crap." He was also very rude to me. He said, "is this your child?" and pointed to Sonjena. I said, "yes." He said, "are you Indian?" (I was thinking non of your darn business.) I said,"no." He said, "is your husband Indian?" I said, "no. adoption." He gave me a dirty look. Then he gave me my papers back. There was some sort of hold up, and while I was standing there waiting, he was telling the other guard something about me, I turned around, and looked at him, and he said,"get on the plane."
And I was like, "what?" And he said,"the plane is boarding. Get on." Nice guy.